To make a cavern first a borehole has to be drilled into a salt formation. The leaching process then makes a cavern starting from the borehole. To do so into the cased well a concentric tubings have to be installed. Through one of these, water is injected into the salt formation, where this water dissolves the salt and creates a void space. The dissolved salt is produced to the surface through the other pipe. In the uppermost part of the cavern, a blanket consisting of oil or nitrogen is placed in order to protect this part from further leaching.

During the total leaching time of about two and a half to four years the shape of the cavern can be influence by a few parameters, such as:

·       Direct or indirect leaching, i.e. injection of water through the inner or outer tubing.

By varying these parameters the shape of the cavern can be controlled for an optimal technical and economical use. Also safety-relevant aspects of geo-mechanical and geological conditions are taken into account. A 3D-Simulationsprogramm that vividly represents the various phases of the cavern leaching helps to plan the process.

The leaching of caverns must be well planned and continuously monitored. On the site of the cavern, where the leaching concept is implemented, the local supervision controls all necessary activities. How shape and volume of cavern (s) develop, is controlled by continuous analysis of leaching and sonar surveys. The leaching procedures are schematically shown below. 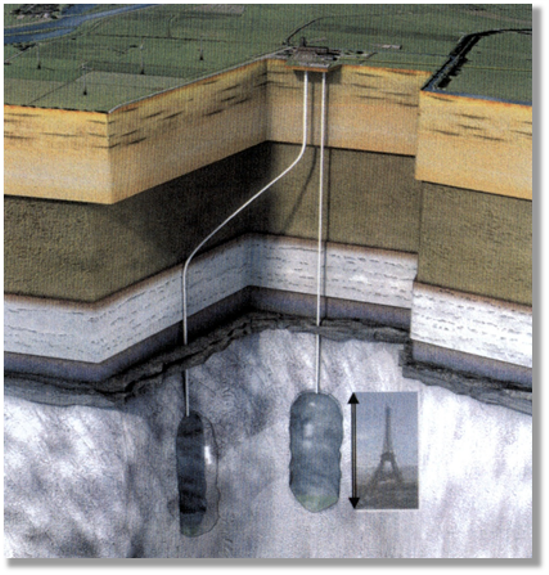